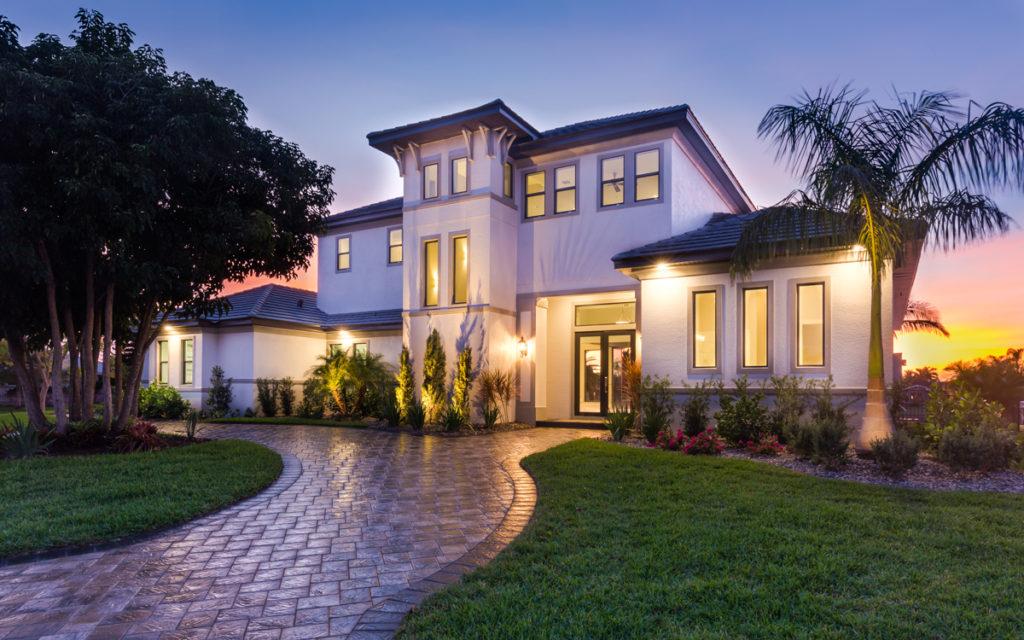 ANDREA STETSON
SPECIAL TO THE NEWS-PRESS

The Town and River just reinvented itself as a model. “We originally built this as a spec house, unfurnished, and we decided to add some upgrades and furnish it,” said Gary Aubuchon, president of Aubuchon Homes. “These modern designs don’t have the architectural details of the Mediterranean homes and we felt people couldn’t visualize the house vacant.” It was a spec home for almost a year. Aubuchon believes it will be much more attractive to buyers now that it is a model. “The feedback was people just could not envision it,” he said. “People could not see how to furnish the great room. They thought the master bedroom was too small and it looks much larger with furniture.” Now the four-bedroom, four and-a-half bathroom home, that spans 3,505 square feet under air and a total of 5,411 square feet of living space, is filled with furniture and decorations. It is priced at $1.99 million. As visitors walk into the home, there are several things that catch the eye.

The infinity-edge pool, that can be seen from the entryway, great room and kitchen, seems to flow right into the canal beyond. “One of the things that we really enjoyed is the way they set up the view for when you walk in and you have the infinity pool and it leads right to the water,” said Vrinda Albrecht, interior designer, Clive Daniel Home. “We kept it open and flowing.” The huge, shiny black island kitchen counter stretches 12 feet long and six feet wide. The dark colors continue with very dark brown cabinets that look almost black. “In contemporary, it is more monochromatic and the colors are often contrasting so the white against the dark works well,” Aubuchon explained. He calls the design transitional leaning toward contemporary. The dining room sticks out into the lanai giving the lanai separate cozy spaces on either side. On one side is an outdoor kitchen and on the larger side is a seating area. With sliders on both sides of the dining room open, it makes one large cooking and eating area. “We really liked that element as well,” Albrecht said. “We wanted to keep it elegant and sleek. We didn’t want it all junked up with arms and backs and legs. We chose benches to keep it low and lean. Once you have the doors open, you are almost 360 degrees with the view. It is almost like you are eating outside without being outside.” The great room features a wall of black/gray stone that houses the large flat-screen television, an LED fireplace that lights up blue or orange, and shelving for an array of shells and silver feathers. Susan Trivison, interior designer for Clive Daniel Home, said that wall adds to the waterfront theme they created throughout the home.

“The “wow” feature we added was a feature wall to the great room,” Trivison said. “The home is on a waterfront location with the infinity pool and the influence of the pool made us bring out the colors of the gray and blue hues inside the house.” “We wanted to carry the water and the movement and the flow of water,” Albrecht added. So she added a chandelier that looks like round balls and a blue rug and a circular sofa. The water theme continues in the half bathroom that has wallpaper that looks like sparkly sand on a beach. All four bedrooms are suites with two downstairs and two more upstairs. “We understand who the buyer might be,” Aubuchon said as he explained this design. It’s for grandparents, parents and grandchildren. So each could have their own space.” The master bedroom features 10-foot high sliding glass doors and 12-foot ceilings. There is also a long horizontal window over the bed. Both the master bedroom and downstairs guest room have sliding glass doors to the lanai. The lanai has a terraced design with levels of grassy type space leading to the water. “It gives some visual interest to the outdoor space,” Aubuchon said.

A coffee table has a biofuel fire pit built right into it. “I love that feature,” Trivison said. “A lot of people think in Florida a fire pit is too hot. But with the water and the fire, it brings in another element, and in the evenings it can be cool.” Upstairs is a loft with a sitting area. There is a round table and a half circular white couch. But what pops out in that room are the cushy orange chairs with thick clear rounded armrests. “I thought those chairs came right off the set of Austin Powers,” Aubuchon described. “The orange chairs give a little splash of color.” “We wanted to add some lightheartedness to that area without making it too juvenile,” Albrecht added. “It was important that it was upscale and glamorous and fun. We wanted that space to be memorable. We wanted it to be a space to create memories with your family or your friends.”

The two upstairs suites have sliding glass doors that lead to an upstairs terrace. Aubuchon said other special features include a three-car garage and two driveways that have room for 10 cars to park. The house is located in the Town and River community in Fort Myers. It is on an oversized waterfront lot with 120 feet of canal frontage.

Expect more from your builder. Allow us to exceed your expectations

Tell Us Your Story ›